Aims and Hurdles of Cleaning the Ganga 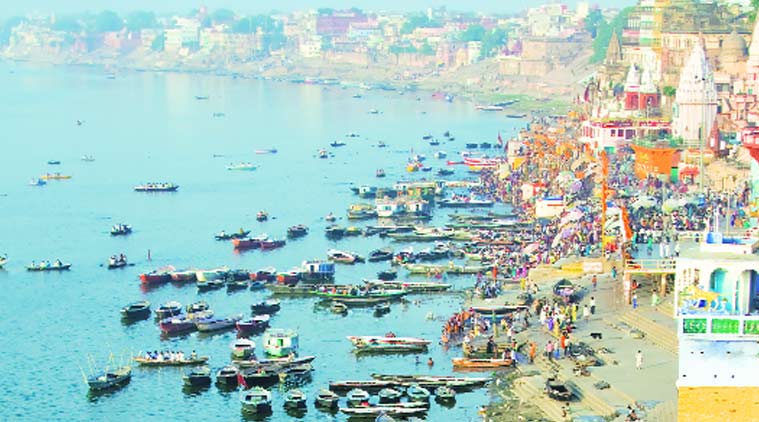 It isn’t walking on water, but still a very difficult job — one that India has been trying unsuccessfully to accomplish for the last three decades. AMITABH SINHA lists the steps the government has planned to make India’s holiest river pollution-free

Much of the effort to clean the Ganga over the last 30 years has been centred around creating sewage treatment capacities in major urban centres along the river. Besides the fact that a lot of this capacity has remained underutilised or non-functional, the discharge of urban sewage is only one of several interventions required to rid the holy river of pollution.

The government’s Namami Gange programme seeks to tackle the problem at several levels at the same time. “Rejuvenation” of the Ganga includes reviving ‘Aviral Dhara’, or continuous flow in stretches that have gone dry due to natural or man-made reasons, regenerating the river ecology, making the river an important inland waterway, reviving it as a habitat for dolphins and gharials, and spreading awareness about the need to keep the Ganga clean.
But the first step no doubt is to restart the effort to clean the river that runs for some 2,500 km through five states, and is said to provide direct livelihood to almost 13 million Indians. Uttarakhand, Uttar Pradesh, Bihar, Jharkhand and West Bengal together generate over 7,300 million litres of sewage per day that flows directly or indirectly into the river. About half of this comes from Tier I and Tier II towns like Kanpur, Allahabad and Varanasi. Currently, the five states together have the capacity to treat only about 3,300 million litres of sewage — or about 45 per cent of the total. The rest flows into the river untreated. This colossal volume might actually be even greater, because large parts of major urban centres like Kanpur and Varanasi are not even connected to the sewage network, and their waste remains unaccounted for.

Creating sewage treatment plants (STPs) was at the core of the Ganga Action Plan that began in 1985. About 1,000 million litres of sewage treatment capacity per day was set up, but lackadaisical state governments and lack of maintenance by municipal authorities have kept a large part of this capacity on paper alone.

The government has now decided to rope in corporates to do this work in all the 118 urban centres along the river. Companies will have to create additional capacities, use existing capacities at optimum levels, and operate and maintain the facilities for a minimum 15 years to produce treated water at prescribed standards.

They will receive some money from the government upfront for creating the infrastructure, but the rest of their investment, operation and maintenance costs, and a pre-decided profit would come in the form of annuities over the 15-year period.

The government hopes that annuity-based payments and guaranteed returns would keep the firms interested. The companies will also be allowed to sell the treated water to generate additional revenues.

About 1,650 gram panchayats lie directly on the banks of the Ganga. The sewage they generate is almost entirely untreated. About half the population in these villages defecates in the open. The government plans to use biological means to deal with this waste. It wants to experiment with a model said to have been used in a Punjab village by a local spiritual leader, Baba Balbir Singh Seechewal, who is credited with the successful cleaning of the Kali Bein river with public participation.Seechewal is supposed to have inculcated the practice of segregation of solid and liquid waste, treatment of waste water through oxidation ponds, use of treated water for irrigation, and composting of solid waste. He is said to have infused a sense of community participation and ownership of the river.

Seechewal is supposed to have inculcated the practice of segregation of solid and liquid waste, treatment of waste water through oxidation ponds, use of treated water for irrigation, and composting of solid waste. He is said to have infused a sense of community participation and ownership of the river.

There are 764 grossly polluting industries on the banks of the Ganga, mostly in Uttar Pradesh. These include tanneries, paper and pulp industries, sugar mills, dyeing factories, distilleries, and cement plants. Effluents from all these flow untreated into the river. Tanneries near Kanpur alone generate about 25 million litres of effluents daily.

These industries have been repeatedly told to set up common effluent treatment plants (CETPs), install new technologies, and ensure zero liquid discharge into the river. But enforcement has been lax. The industries have now been given a fresh ultimatum — last year, the National Green Tribunal told them to comply with pollution control norms or face closure. The request of some industries for more time has been granted.

Solid waste, clothes, polythene, and all kinds of religious offerings are dumped into the river, and float on its surface. It is the easiest to clean them — and can result in a quick visual makeover for the river.

Machines called trash skimmers have been ordered from abroad to clean the river surface near all major towns. One of these skimmers is already operating in Varanasi. If the machines arrive on time, work on cleaning the river surface is expected to begin by March. The government has also invited corporate groups to take up this task as part of their corporate social responsibility.

Cremation along rivers and immersion of remains is a unique reason for pollution in Indian rivers, and especially the Ganga. Burning of wood leads to air pollution as well. One of the efforts in the Ganga Action Plan of 1985 was to build gas or electric crematoriums, especially in religious centres like Varanasi and Allahabad. Not much was achieved, however.

The current programme seeks to build at least 100 crematoriums by November this year. A standard design has been prepared and approved. Renovation and modernisation of existing crematoriums too has been ordered. Work is under way at some places.

Several other components of the Clean Ganga programme are planned to be initiated simultaneously. These include the launch of a public awareness exercise, regeneration of aquatic biology, plantations, and riverfront development. A comprehensive law on the Ganga is also in the offing.