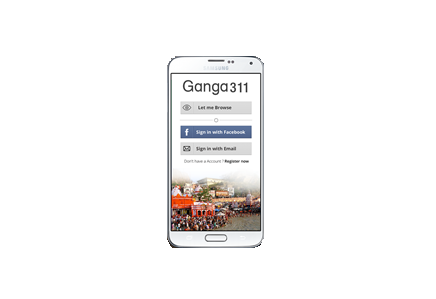 Pollution in the Ganga could be tracked through an Android-based application, The National Mission for Clean Ganga (NMCG) will launch the new app for Android mobile phones in May

"With this app, one can send pictures of the sewage treatment plants and other activities related to the Ganga," said NMCG director TVSN Prasad while talking to reporters on Monday. The facility is being introduced with the help of ISRO. It is an effort to connect people with the mission of cleaning the holy river, he explained.

Prasad said that to put a check on pollution, a Ganga Task Force is being introduced in collaboration with Army. Four battalions of a composite eco task force known as Ganga Task Force will be raised for the protection of the river. The task force will be responsible for plantation of saplings in upper reaches and banks of the Ganga, strengthening of pollution monitoring mechanism on ground, watch for protection of bio-diversity, among other things.

He said that the provision of third party inspection of the ongoing works is also being considered to bring transparency.

In Varanasi, 100% tender process of STPs will be completed by October. After that it will take two years to complete the construction of STPs, he said. The city will he STPs of a total capacity of over 400MLD after completion of the project. Presently the city has three STPs with 102MLD capacity only.

He said that action plan for the treatment of industrial effluents had been sought from all industrial units in 118 towns situated along the Ganga in the country. The government would try to help them in establishing effluent treatment plants.