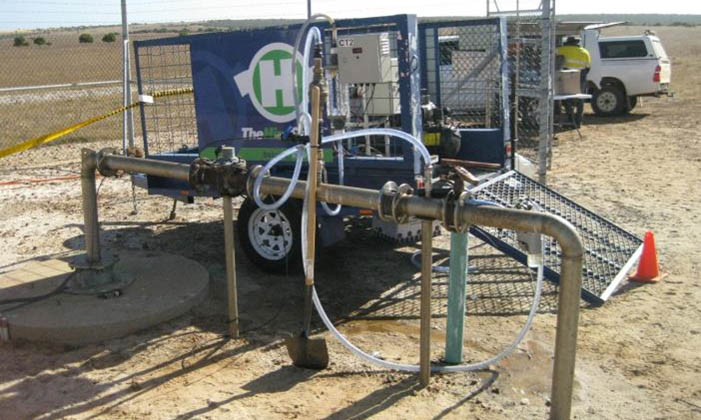 An inexpensive, portable and safe water disinfection system from Australia could be one solution to rehabilitating the Ganga River in Rajasthan.

The company, from the arid state of South Australia, is part of a business delegation visiting India in August to help provide water solutions for Rajasthan.

Hydro-dis Managing Director Mark Carey said the Hydro-dis technology is a simple alternative to other treatment methods and is suited for rural communities.

The transportable machine can be attached to any pipe so that dirty water flows in one end, is treated and then flows out the other side clean.

Systems are scalable and can churn up to 10 million litres a day. “We are reducing environmental footprints and costs across the board,” said Carey. “Our technology eliminates the transport side of the equation and the storage. It is also simple to set up.

“We are looking to work on a number of different projects (in Rajasthan) and the Ganges is certainly one of the biggest ones where they are trying to use the water for drinking.”

The Indian Government last week announced its intention to reduce the industrial effluents and sewage that pollute and obstruct the flow of the river Ganga.

Carey said the Hydro-dis technology did not require harmful materials such as chlorine gas because it used minerals already in the water to fuel the disinfectant process. It uses in situ electrocatalytic generation of chlorine to disinfect water and can be used for various industries to create potable and non-potable water from wastewater.

The unique technique creates chloride ions from salt already present in the water, making it suitable for freshwater and saltwater sources.

The device also works to prevent scaling and fouling. “In a rural community with a gas plant (to treat water), once the gas runs out they have to keep replenishing it – trucks are having to travel out there all the time and refill the gas station,” he said.

“Chlorine gas can be quite dangerous and there are a lot of safety procedures for using it. You need a purpose-built building, air quality monitoring and alarms for escape of gas as well as self-contained breathing apparatus.”

Hydro-dis has several machines operating in rural areas in Australia. It is ramping up production with the aim of helping rural communities across the globe.

According to the World Health Organisation, about two million deaths per year are attributable to unsafe water supply, sanitation and hygiene.

South Australia is the driest state in the driest continent in the world and has become a world leader in water treatment and reuse technologies. This year, Hydro-dis was awarded the Water Treatment and Re-Use Award for its disinfection technology at the 2016 Smart Water Awards in South Australia’s capital, Adelaide.

“One of the key projects under the strategy, and identified as an area of opportunity with our sister-state Rajasthan, is leveraging South Australia’s water and wastewater management expertise.

“South Australia is considered a world-leader in water management. Improving water quality and the pollution load of the Ganges provides opportunities for our State.’’