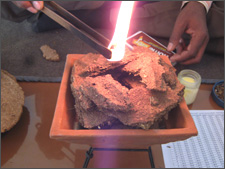 The National Mission for Clean Ganga (NMCG) is exploring to start a pilot project of using cow dung cakes in place of wood for cremation.

Cow is worshipped in India for ages as ‘mother’ and now it could also be facilitator in providing ‘moksha’. The National Mission for Clean Ganga (NMCG) is exploring to start a pilot project of using cow dung cakes in place of wood for cremation. The move is expected to cut down on pollution caused by funeral pyre on the banks of river Ganga on ghats of Varanasi and Haridwar.

The Ganga Mission has been for some time exploring alternative methods of cremation to cut down on pollution. Several Hindus prefer to get cremated in Varanasi and Haridwar for salvation and the whole process adds to the impurities of the holy river.

The NMCG is now seriously considering a method proposed by a Maharashtra-based NGO Sarthak Charitable Trust, whereby a platform and mould has been created which uses cow dung cakes for cremation and has been found to be economical, sustainable and less polluting.

“Going by statistics, the mould is made of ceramics (inner portion) and it requires 40 pieces of cow dung cakes for burning the body in 2 hours. The traditional cremation process requires 200 kg of wood and takes 12 hours,” said sources in the Ministry of water Resources, River Development and Ganga Rejuvenation.

The ministry feels that that the method of using cow dung cake will have acceptance among masses as cow is worshipped in the country. An expert committee of the ministry is already considering adopting it on pilot basis on Ghats of Varanasi.

“Electric crematorium is still not widely accepted in the country owing to our religious and cultural mindset and people prefer pyre especially in holy cities. Even, the investment in electrical crematorium very is high and in many cities there is shortage of power. We feel that people will not have much hesitation in adopting this method of cremation,” said the official.

Another benefit of the ceramic mould is that people can put the body themselves and lock the mould themselves.

“The NGO has done research on non acceptance of electrical crematoriums and found that people feel sudden separation after the electric platform is closed and in this method there is a option where they can lock the mould themselves,” the official added.

The government has also roped in many saints and gurus to propagate the idea of using alternative methods of cremation among people.