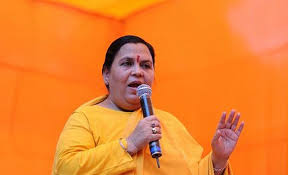 Ganga will be cleaned in a "qualitatively manner" within next two years, Union Water Resources Minister Uma Bharti said here on Sunday.

"The plan for cleaning Ganga was made in 1985 but nothing happened in that direction in the last 29 years. As per my plan, we will clean Ganga in a qualitative manner in two years," Bharti said.

She was addressing the concluding session of a three-day long River Festival organised by 'Narmada Samagra' NGO at the confluence of Narmada and Tawa rivers at Bandrabhan in Hoshangabad district.

She said Prime Minister Narendra Modi had given her a free hand in cleaning the sacred river and all ministries are with her department for the purpose.

Bharti said her ministry was taking all possible measures for the conservation of rivers in the country and efforts are being made to ensure that no river is dried up.

"Rivers will be inter-linked to ensure continuous flow of water in them, like linking of Ken-Betwa-Narmada-Kshipra rivers in Madhya Pradesh," she said.

Bharti said schemes would be framed taking into consideration the geographical and other attributes of each and every river in the country.

Praising 'Narmada Samagra' head and Rajya Sabha MP, Anil Madhav Dave, the minister said that under his leadership, the NGO ensured a continuous flow of water by involving people and other stake-holders living around the holy river.

She said she has named Ganga cleaning campaign as 'Ganga Samagra Abhiyan' because she was impressed with the work being done by the NGO on this front.

For making rivers pollution-free, people will have to ensure cleanliness and greenery along the periphery of rivers by planting trees.

Dave said a total of 1123 representatives working for the conservation of 310 rivers in the country took part in the river festival and shared their experiences.

He said next such event will be organised in 2018. Source