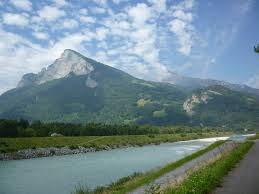 After a huge blast polluted the Rhine river, Europe's longest river, the International Commission for the Protection of the Rhine (ICPR) brought it back to life three years before schedule.

Thirty-years ago, a huge blast at the Sandoz chemical plant in Basel, Switzerland, leaked tonnes of toxic chemicals in the Rhine, Europe's longest river. Polluted for long with depleting aquatic life, the industrial accident became a turning point in the river's history and six countries came together to roll out an action plan to clean the mighty river. Through the late 1980's and most of 1990's the International Commission for the Protection of the Rhine (ICPR) rigorously implemented the Rhine Action Programme to revive the river, especially fishes.

Three years before schedule, the river was back to life as the Salmon returned to the Rhine and in the new century the river has once again become pristine with water clean enough to drink and swim.

Europe's industrial powerhouse has taken a lead over other countries in offering their technical know-how and earlier this week, India and Germany signed an implementation agreement for Ganga Rejuvenation under the flagship Namami Gange Programme which also included financial assistance of Rs 22.5 crore. As per the Union ministry of water resources, river development and Ganga Rejuvenation Germany will extend technical support, help in river basin management and also urban waste management.

While Germany had shown keen interest to participate in Ganga cleaning back soon after NDA came to power, Prime Minister Narendra Modi's meeting with German Chancellor Angela Merkel during the Hannover Messe gave it the push it required, sources said. Merkel was environment minister in the German government between 1994 and 1998 and was a key negotiator during the Kyoto climate talk and has plenty of experience in environmental leadership.

Speaking to  dna , Susanne Dorasil, head of economic cooperation and development, German embassy, said that Germany is happy to support the Indian government on the Ganga cleaning especially because there is strong Indian ownership. Drawing parallels between the two rivers she said that like Ganga, Rhine is the subject of many songs, folk tales, and there is a lot of public sentiment attached to the river. Dorassil also added that the process of cleaning the Ganga will take time, as it did with the Rhine.

But, on ground, the collaboration has moved only in the state of Uttarakhand. The German International Cooperation (GIZ), an implementing agency, is a key partner in the Ganga rejuvenation project and it has begun work upstream in the hill state. According to sources, they have carried out assessment studies of ten wastewater treatment plants in Uttarakhand to study their functioning capacities. GIZ's focus in Uttarakhand will be on urban sewage management.

The union government said that though things were slow to begin with, the implementation agreement is likely to give pace to the cooperation. "The experts from Germany will carry out assessment studies based on their experiences, know-how and will suggest the appropriate structure required to take ahead the Ganga basin rejuvenation. We will soon visit the Rhine and Danube rivers to study their model and plug gaps in our approach and plug gaps," said Shashi Shekhar, secretary, union ministry of water resources, river development and Ganga rejuvenation.

The union cabinet had cleared the flagship Namami Gange river cleaning project in May 2015 with a budget of Rs20,000 crore for five years. Currently, a condition assessment' of 30 major towns across Uttar Pradesh is being carried out by Engineers India Limited. This includes assessing condition of drains, ghats and crematoriums along 1100 kms of Uttar Pradesh. Based on their assessment the ministry is likely to restart the process of inviting bids for river cleaning projects in the coming months. The Centre has also taken a new approach to award contracts for river cleaning after realising that existing sewage treatment plants were functioning below capacity. A public-private partnership hybrid annuity based model has been adopted.