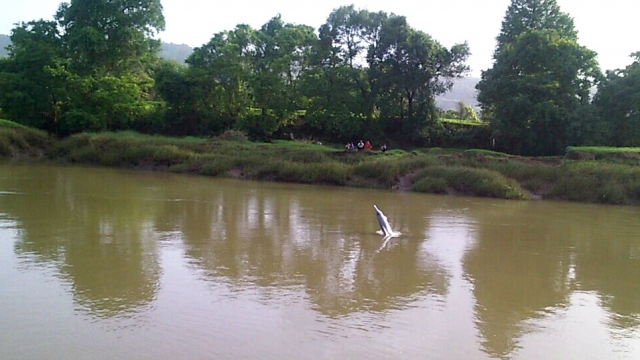 According to reports, the total dolphin population in the entire Ganga range distribution is estimated to be 3,000.

Population of Ganga river dolphins has declined considerably and they are on the verge of extinction, Parliament was informed on Tuesday.

"As reported by the Ministry of Water Resource, River Development and Ganga Rejuvenation, the Ganga river Dolphin...is distributed in the Gangetic-Brahmaputra-Meghna and Karnaphuli-Sangu river systems in India, Nepal and Bangladesh and the population has declined considerably and that they are on the verge of extinction," Minister of State for Agriculture Sanjeev Balyan said.

The Water Resource Ministry has informed that the total population of the Ganga river dolphin is estimated to be between 2,500-3,000 in its entire distribution range, out of which more than 80 per cent is within the Indian territory, he said in a written reply in Lok Sabha.

According to the Wild Life Institute of India (WII), Dehradun, this species is facing series of threats for survival in recent years, the Minister said. Various organisations like WII and the Environment Ministry has informed that activities like construction of dams and barrages, embankments etc besides unsustainable obstruction of river water and sand mining among others are mainly responsible for shrinking of habitat and decline of Ganga river dolphins.

Ganga river dolphins are listed in Schedule-1 of the wild life protection act and thereby according them the highest degree of protection during hunting.