Is Corporatisation The Way to Clean Ganga? 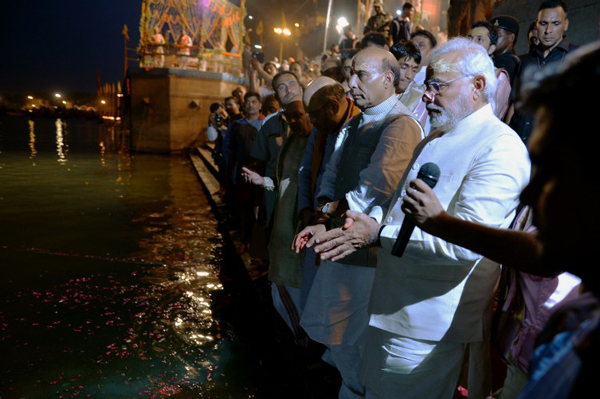 Public-private partnerships have been the buzz for quite some time. And now the government plans to introduce the model to clean up rivers

Union Water Resources Secretary Shashi Shekhar recently said talks were underway to set up a company to implement river-cleaning projects. Details will be out early next month during the 'Ganga Manthan', which would involve public consultations and discussions among all stakeholders.

The Centre also plans to register National Mission for Clean Ganga (NMCG) as a company that will be responsible for treating industrial waste and sewage flowing into the river. Cleaning up the Ganga, a river considered holy in Hindu tradition, has been one of the emotive planks of the Narendra Modi government. Modi himself represents Varanasi, a city on the banks of Ganga considered to be a spiritual seat, in Lok Sabha.

Earlier this month, a special purpose vehicle was set up to hasten the cleaning of the river. Last month, the government sought to ban construction across the the river basin.

The National Green Tribunal (NGT), not happy with the government's functioning, directed the central government not to release funds for cleaning the river from Gomukh to Kanpur without its approval. The NGT said there was no data regarding on sewage and industrial discharge at the state level.

Ganga originates from Gomukh in Uttarakhand while Kanpur, downstream, is in neighbouring Uttar Pradesh.

Many activists and those involved with the Clean Ganga mission consider corporatisation to be a regressive move, a step towards privatising the mission.

"The question of accountability vanishes with a PPP model. Information flow will be within the government and the private entity involved. There will be lack of transparency," said R Sridhar, managing trustee at Environics, an environmental not-for-profit.

A PPP model will make passing the buck easier as the government will be able to excuse itself by saying the company in question failed to deliver on its promises, Sridhar said.

"Most corporates are in debt. Why will they be interested in being a part of a PPP model unless they can profit from it? The entire motive of the mission would be lost."

Sridhar pointed out to the failure of PPP in even highly lucrative sectors like infrastructure. According to a report, between 2007 and 2012, out of the $225 billion invested by the private sector in infrastructure - much of it through PPPs - projects worth only $70 billion was under way or complete.

BD Tripathi, founder and member of the National Ganga River Basin Authority of India (NGRBA), agrees. "Some positive steps are being taken by the government, like banning all construction around the river. But this step is definitely retrograde."

Tripathi argues that millions of rupees have already been spent, but with little impact. More than a change in model, what is required is to asses what went wrong with the previous attempts.