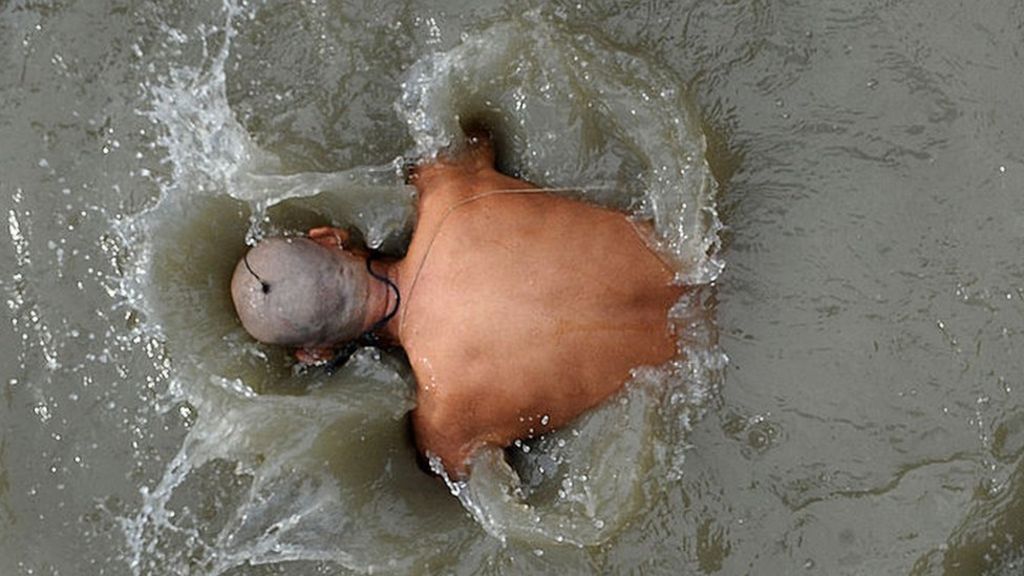 Readings showed that the water level in the canal connecting the river to the plant was going down rapidly. Water is used to produce steam to run the turbines and for cooling vital equipment of coal-fired power stations.

By next day, authorities were forced to suspend generation at the 2,300-megawatt plant in Farakka town causing shortages in India's power grid. Next, the vast township on the river, where more than 1,000 families of plant workers live, ran out of water. Thousands of bottles of packaged drinking water were distributed to residents, and fire engines rushed to the river to extract water for cooking and cleaning.

The power station - one of the 41 run by the state-owned National Thermal Power Corporation, which generates a quarter of India's electricity - was shut for 10 days, unprecedented in its 30-year history.

"Never before have we shut down the plant because of a shortage of water," says Milan Kumar, a senior plant official.

"We are being told by the authorities that water levels in the river have receded, and that they can do very little."

Further downstream, say locals, ferries were suspended and sandbars emerged on the river. Some 13 barges carrying imported coal to the power station were stranded midstream because of insufficient water. Children were seen playing on a near-dry river bed.

Nobody is sure why the water level on the Ganges receded at Farakka, where India built a barrage in the 1970s to divert water away from Bangladesh. Much later, in the mid-1990s, the countries signed a 30-year agreement to share water. (The precipitous decline in water levels happened during a 10-day cycle when India is bound by the pact to divert most of the water to Bangladesh. The fall in level left India with much less water than usual.)

Monsoon rains have been scanty in India for the second year in succession. The melting of snow in the Himalayas - the mountain holds the world's largest body of ice outside the polar caps and contributes up to 15% of the river flow - has been delayed this year, says SK Haldar, general manager of the barrage. "There are fluctuations like this every year," he says.

But the evidence about the declining water levels and waning health of the 2,500km (1,553 miles)-long Ganges, which supports a quarter of India's 1.3 billion people, is mounting.

Part of a river's water level is determined by the groundwater reserves in the area drained by it and the duration and intensity of monsoon rains. Water tables have been declining in the Ganges basin due to the reckless extraction of groundwater. Much of the groundwater is, anyway, already contaminated with arsenic and fluoride. A controversial UN climate report said the Himalayan glaciers could melt to a fifth of the current levels by 2035.

Emmanuel Theophilus and his son, Theo, kayaked on the Ganges during their 87-day, 2,500km journey of India's rivers last year. They asked fishermen and people living on the river what had changed most about it.

"All of them said there had been a reduction in water levels over the years. Also when we were sailing on the Ganges, we did not find a single turtle. The river was so dirty that it stank. There were effluents, sewage and dead bodies floating," says Mr Theophilus.

The waning health of the sacred river underscores the rising crisis of water in India. Two successive bad monsoons have already led to a drought-like situation, and river basins are facing water shortages.

The three-month-long summer is barely weeks away but water availability in India's 91 reservoirs is at its lowest in a decade, with stocks at a paltry 29% of their total storage capacity, according to the Central Water Commission. Some 85% of the country's drinking water comes from aquifers, but their levels are falling, according to WaterAid.

No wonder then that conflicts over water are on the rise.

Thousands of villagers in drought-hit region of Maharashtra depend on tankers for water; and authorities in Latur district, fearing violence, have imposed prohibitory orders on gatherings of more than five people around storage tanks. Tens of thousands of farmers and livestock have moved to camps providing free fodder and water for animals in parched districts. The government has asked local municipalities to stop supplying water to swimming pools.

States like Punjab are squabbling over ownership of river waters. In water-scarce Orissa, farmers have reportedly breached embankments to save their crops.