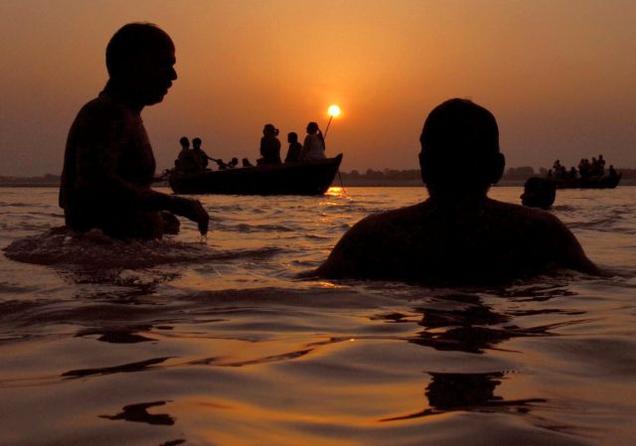 Do the waters of the Ganga have special anti-microbial properties? Can knowledge about this ‘self-healing’ ability be used for medicinal purposes?

A preliminary report that addresses these and related questions will be made public in October, on the basis of a study conducted by three labs of the National Environmental Engineering Research Institute (NEERI), which comes under the Council for Scientific and Industrial Research (CSIR).

Ahead of the publication, the general impression shared by scientists involved in the project is that the waters of the Ganga do have “special properties” and were “unlike other rivers”.

Rakesh Kumar, the Director of NEERI, said: “There is prima facie evidence of the uniqueness of the Ganga,” adding that to put the findings on a firmer footing, the research team is comparing sediments from various stretches of the river with those from the Narmada.

“This is a study with potential and not just folklore,” declares Girish Sahni, Director-General of CSIR.

The research on the Ganga’s self-healing properties, about one-and-a-half-years old now, is part of a larger study commissioned by the Union Water Resources Ministry to study the ecology, health and biodiversity of key tributaries of the Ganga.

NEERI has been working with two other CSIR labs — the Central Institute of Medicinal and Aromatic Plants, Lucknow and the Institute of Microbial Technology (IMTech, Chandigarh) — on testing various hypotheses associated with the project, which covers the stretch of the river from Gangotri to a little downstream of Allahabad.

“This is not just puranic wisdom. Brahmadravya (divine liquid) is a property attached to the river from texts such as Akbarnama and contemporary scientists too,” said Ms Bharti.

A multi-lab effort by the National Environmental Engineering Research Institute, the Central Institute of Medicinal and Aromatic Plants, Lucknow and the Institute of Microbial Technology (IMTech, Chandigarh) is studying the possible medicinal properties of the waters of the Ganga. Director-General of the Council for Scientific and Industrial Research — the apex body for all the labs — Dr. Girish Sahni said: “What is observed is that water samples closer to the source (Gangotri) do not putrefy.” He added that a part of the study is to understand why, and investigate the ecosystem of microbes and bacterial life in the river.

One hypothesis is that the waters of the river contain bacteriophages — viruses that replicate within bacteria and are toxic to them. The IMTech would study these phages for their antimicrobial properties and look at whether these could be translated into effective drugs in future.

The scientists require data spanning two monsoon seasons and are also tasked with examining if effluent discharges and other contamination may have a role in diminishing the river’s healing properties. “Before the river reaches Allahabad, we have seen that even drains and rivulets retain some of these properties but they degrade later on. Why?” queried Union Water Resources and Ganga Rejuvenation Minister Uma Bharti.