Only 13 of 145 Ganga Projects Completed 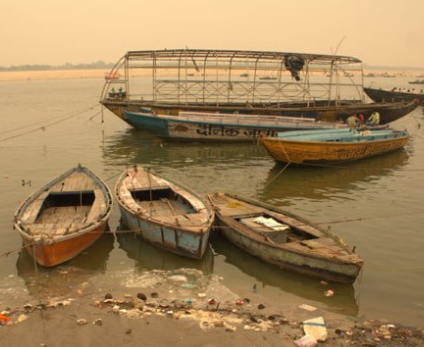 'Namami Gange' programme will soon mark two years, but it has not yet picked up the desired pace on the ground with only 13 of the 145 sanctioned projects having been completed so far.

Though its momentum is much higher than what the states on the Ganga main stem had witnessed in three decades (1985-2015) during two phases of the 'Ganga Action Plan', the latest data of the water resources ministry indicate that a lot more needs to be done to complete the gigantic task.

The projects so far completed have created a capacity of only 198.13 million litres per day (MLD) of new sewage treatment plants (STPs).

It means the task ahead is too big to meet the requirement by 2020, considering the fact that the treatment capacity of only 3,500 MLD is available out of total 8,250 MLD of waste water generated in towns cities in the Ganga river basin.
The Union cabinet, chaired by PM Narendra Modi, had approved the `Namami Gange' programme in May, 2015 and sanctioned Rs 20,000 crore for five years (2015-2020).

Asked about the slow pace of implementation of the programme, former Union water secretary Shashi Shekhar said, “States' resistance, mainly of Uttar Pradesh and Uttarakhand, for one or the other reason was the main cause for delay.

Besides, the long period of model code of conduct during the recent assembly polls also delayed the tendering process. States had, in fact, been insisting on implementing the projects on their own.“

Shekhar, who had been instrumental in sanctioning many of the projects before his retirement in December, believes that the pace of implementation will now pick up.He told TOI, “I don't see any reason now for UP and Utta rakhand in not taking up the assigned tasks on the ground quickly (as both states have BJP-led governments). The Centre will now, hopefully , have smooth coordination.“

Under `Namami Gange' (Integrated Ganga Conservation Mission), the Centre had planned 100% central funding of various activities and adopted a PPPSPV approach for implementing those tasks, including setting up STPs and their operation and maintenance for a minimum 10-year period.

Shekhar suggested that the Centre should stick to it and go for the PPP mode by giving works to only big companies.

“There should also be a condition of time-bound implementation of projects.Fly-by-night operators should not be involved at any cost for implementing those projects,“ he said. He noted that public sector companies like WAPCOS and Engineers IndiaBSE -0.07 % Limited (EIL) are doing very good job and the ministry should engage with them for bigger tasks.