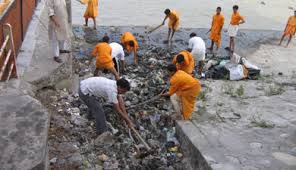 The National Mission for Clean Ganga (NMCG) is set to release into the public domain data gathered from 110 industries that release effluents into the Ganga. These industries are located in five states, and release their waste into the Ganga and its tributaries. The devices to monitor the effluents - both quantity and quality - were installed on the instructions of a recent order of the National Green Tribunal.

The gadgets were installed right next to the point from where the effluents were released out of the industries, before joining the river. Once effluents enter the river, it becomes difficult to assess which pollutant has entered the river from where, and in what quantity.

Prasad said moves were afoot to get even the smaller industries located near the river to install the device for monitoring pollutants. "We are encouraging even small industries to install such gadgets. If they cannot do so on their own, small clusters of such industries can be built and connected to these gadgets. Either the state government or the private sector can be roped in to do so."

Of 2,723.3 MLD sewage that flows down into the Ganga, around 25% comes from industries, Prasad said.

"There are some 764 highly toxic industries in the states on the Ganga banks. These industries are dumping their extremely harmful waste into the river and its tributaries," the NMCG official said.

Prasad added that gradually, all industries that release effluents into the river will have to maintain day-to-day record of waste and its disposal. "NMCG is going to keep a check on them through these gadgets," he said.

This ambitious scheme has been launched by the Union ministry of water resources, river development and Ganga rejuvenation.