Study of Ganga ​to Determine ​Population of ​Aquatic ​Life 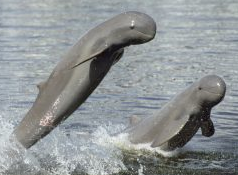 The Government of India has launched a comprehensive and scientific 'across-the-river' survey in the River Ganga to determine the population of aquatic life surviving in the river.

The study will include the endangered Gangetic dolphin.

Key Features of the Survey

The first edition of the survey to determine the aquatic life in river was launched on March 1, 2017 from Narora to Bijnor in Uttar Pradesh, which is spread at a distance of nearly 165 km.