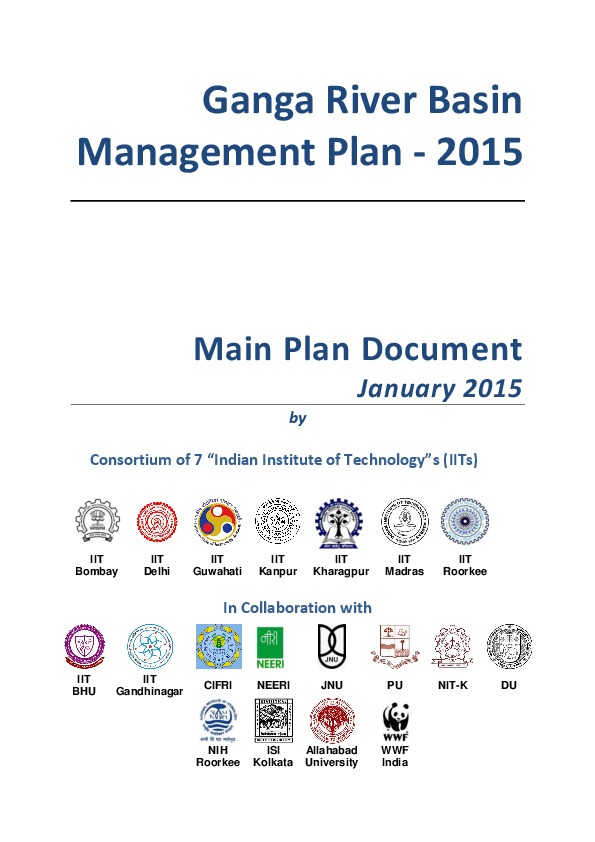 In exercise of the powers conferred by sub-sections (1) and (3) of Section 3 of the Environment (Protection) Act, 1986 (29 of 1986), the Central Government constituted the National Ganga River Basin Authority (NGRBA) as a planning, financing, monitoring and coordinating authority for strengthening the collective efforts of the Central and State Government for effective abatement of pollution and conservation of the river Ganga. One of the important functions of the NGRBA is to prepare and implement a Ganga River Basin Management Plan (GRBMP). A Consortium of seven "Indian Insitute of Technology"s (IITs) were given the responsibility of preparing the GRBMP by the Ministry of Environment and Forests (MoEF), GOI, New Delhi. A Memorandum of Agreement (MoA) was therefore signed between the 7 IITs (IITs Bombay, Delhi, Guwahati, Kanpur, Kharagpur, Madras and Roorkee) and MoEF for this purpose on July 6, 2010.

The GRBMP is presented as a 3-tier set of documents. The three tiers comprise of: (i) Thematic Reports (TRs) providing inputs for different Missions, (ii) Mission Reports (MRs) documenting the requirements and actions for specific missions, and (iii) the Main Plan Document (MPD) synthesizing background information with the main conclusions and recommendations emanating from the Thematic and Mission Reports. It is hoped that this modular structure will make the Plan easier to comprehend and implement in a systematic manner.

There are two aspects to the development of GRBMP that deserve special mention. Firstly, the GRBMP is based mostly on secondary information obtained from governmental and other sources rather than on primary data collected by IIT Consortium. Likewise, most ideas and concepts used are not original but based on literature and other sources. Thus, on the whole, the GRMBP and its reports are an attempt to dig into the world's collective wisdom and distil relevant truths about the complex problem of Ganga River Basin Management and solutions thereof.

Secondly, many dedicated people spent hours discussing major concerns, issues and solutions to the problems addressed in GRBMP. Their dedication led to the preparation of a comprehensive GRBMP that hopes to articulate the outcome of the dialog in a meaningful way. Thus, directly or indirectly, many people contributed significantly to the preparation of GRBMP. The GRBMP therefore truly is an outcome of collective effort that reflects the cooperation of many, particularly those who are members of the IIT Team and of the associate organizations as well as many government departments and individuals.