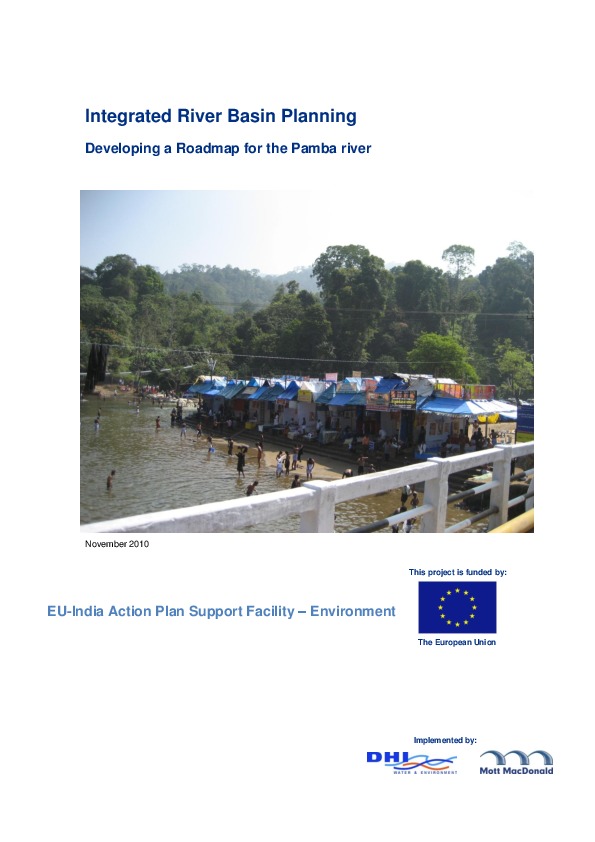 Implemented by DHI and Mott McDonald

Kerala has been practicing traditional water resources management along sectoral lines, centralized by government public departments or institutions with limited stakeholdersâ€Ÿ participation. These traditional water resources management practices have proved to be unsustainable. Integrated Water Resources Management (IWRM) is still in its embryonic stage in Kerala but important steps towards a commitment have been taken by the Government through the establishment of a first River Basin Authority in the state for “the management of the activities connected with the conservation of water resources in the Pampa River and its basins as an integral unit”.... The Pamba Pilot Project has developed a Roadmap for the implementation of priority actions to be taken to integrate an IWRM perspective in its planning processes. The Roadmap has been developed in collaboration with stakeholders from various sectors of the GOK, the Centre for Water Resources Development & Management (CWRDM) and the civil society represented by NGOs active in the Basin.

This activity, “Policy Support to Integrated River Basin Management” under the EU-India Action Plan Support Facility (APSF) project aims to contribute to the continuing EU-India policy dialogue in the water sector by providing support inter alia in project definition, stakeholder relations and integrated water management to new river basin authorities in various parts of India. The identified Pamba Pilot Project seeks to ensure that these authorities have access to current international best practice on integrated river basin management. The output from the activity will contribute to a model for river basin management for other small river basins in India.

The Pamba basin was selected for the pilot project after a focus group discussion at central level and identified as a suitable location for a pilot as the Pamba River is a relatively small river running only in one State. The overall goal of the project has been to facilitate a process for the development of an IWRM Roadmap for the Pamba River and, at the same time, to support the newly set up Pamba River Basin Authority in devising a management plan for future priority actions.

A „Roadmapâ€Ÿ is the transition to a sustainable water resources management practice which is cross sectoral, decentralized, and considers the entire catchment of a river basin as a single management unit. A first attempt to integrate public participation in the creation of an Action Plan for the Pamba River was carried out by the Kerala State Pollution Control Board (KSPCB) in 2002. A comprehensive Action Plan was developed for pollution abatement for the River Pamba. The document is a good attempt towards solving pollution issues in the River Basin but according to IWRM principles, this is a piece meal approach. In order to come to an integrated management plan for the Pamba River, various factors have been considered. The various issues in need of attention have been explored in this document.

The Government of Kerala has expressed a desire for developing the water sector through the application of IWRM principles and practices. The current project has provided first of all, a framework for exploring the following questions:

The Pamba Pilot Project analyzed water resources management practices currently being applied in the state according to the 3 IWRM pillars: (1) the existence of appropriate policies, strategies and legislation for sustainable water resources development and management; (2) putting in place the institutional framework through which to implement the policies, strategies and legislation; and (3) setting up the management instruments required by these institutions to do their job. Bearing this in mind, and using the IWRM planning framework (cycle), it has been determined that Kerala needs considerable efforts to address the capacity building of key water managers and decision makers on IWRM planning and also the empowerment of institutions to spearhead the implementation of IWRM plans.

IWRM in Kerala is far more advanced than in other states in India. Kerala already has a vision which is encapsulated in the Water Policy of 2008 and the enactment of the Pamba River Basin Authority which is represented by stakeholders from 11 different governmental sectors as well as autonomous research institutes. However, water management is still sectoral and inclined towards service delivery with a bias towards the strong irrigation sector. Stakeholder participation is starting to exist with the recent resurrection of the Pamba River Basin Authority that has been called back into existence in the past year.

Water related issues identified were accounted to the increase of pilgrims travelling to the area during the Sabarimala annual pilgrimage, to which an estimated 45–50 million devotees come every year, lack of awareness, continuous increase of contamination due to urban waste, sand mining, encroachment and sedimentation. On the other hand, management problems were identified to ranging from legislations and policies not being enacted, lack of enforcement of existing legal framework, adjustment of existing legal water framework for Kerala state, setting-up a sustainable monitoring and evaluation system for water resources management and establishment of an information system on water resources.

This Roadmap constitutes a blueprint for action that moves Kerala closer to its IWRM vision, starting with immediate suggested actions to develop towards implementation of IWRM in its operations. The Roadmap is constituted of next steps, milestones and indicators for implementation of actions. The main actions identified in the Roadmap are the immediate need for operationalization of the Pamba River Basin Authority followed by adequate and thorough capacity building at state and local level in IWRM practices and the development of a full IWRM Action Plan for the River Pamba.

Fair amount of work is needed to align Pambaâ€Ÿs River Basin Authority and its working structure to support the development and implementation of IWRM plans in the future as well as its constraints to water resources development. Another limitation is the insufficient definition of institutional roles and responsibilities, especially in the newly set up Pamba River Basin Authority. Lack of sharing of data and coordination between departments to constitute baseline data required for planning and decision-making is another identified weakness