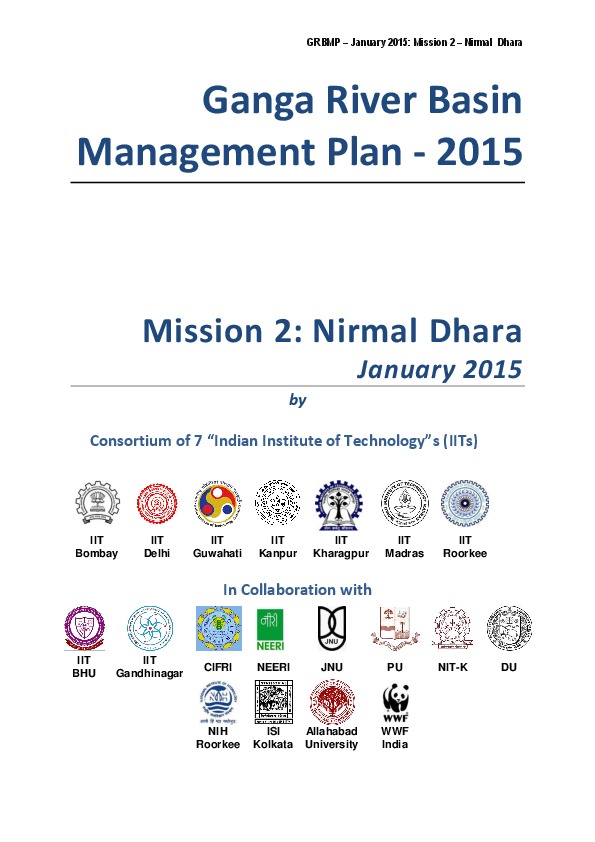 In modern times, the Ganga River System's water quality has been significantly polluted by disposal of anthropogenic wastes into the rivers. The wastes include both solid and liquid wastes of hazardous and non-hazardous types generated mostly from domestic, industrial and agricultural sources. Liquid wastes from large urban centres and industries are major point sources of pollution, while surface runoff containing agrochemicals and entrained solid wastes are some major non-point pollution

In keeping with the above requirements, the main recommendations are grouped under the following heads: (1) Management of Solid and Liquid Wastes Generated from Domestic/Commercial Sources; (2) Riverfront Development, Floodplain Management and Rejuvenation of Water Bodies; (3) Management of Solid and Liquid Waste Generated from Industrial Sources; and (4) Management of Polluted Agricultural Runoff. Effective co-ordination of these activities is envisaged through a high-level constitutional body tentatively named the 'National River Ganga Basin Management Commission' (NRGBMC), pending whose formation the NMCG or some other dedicated government body may coordinate the activities.

Financing of the above projects may be obtained from central/state governments, local revenue, corporate and private donations and grants, low cost debt from multinational organizations, commercial debts from banks and private equity. Category A and Category B projects are recommended for execution through the PPP route (such as the DBFO model) with initial investment from the service provider, while Category C projects may be executed by the concerned industries themselves and through SPVs for industrial clusters. Category D projects may be synergistically executed with other government projects as per actions desired under other Missions of GRBMP.