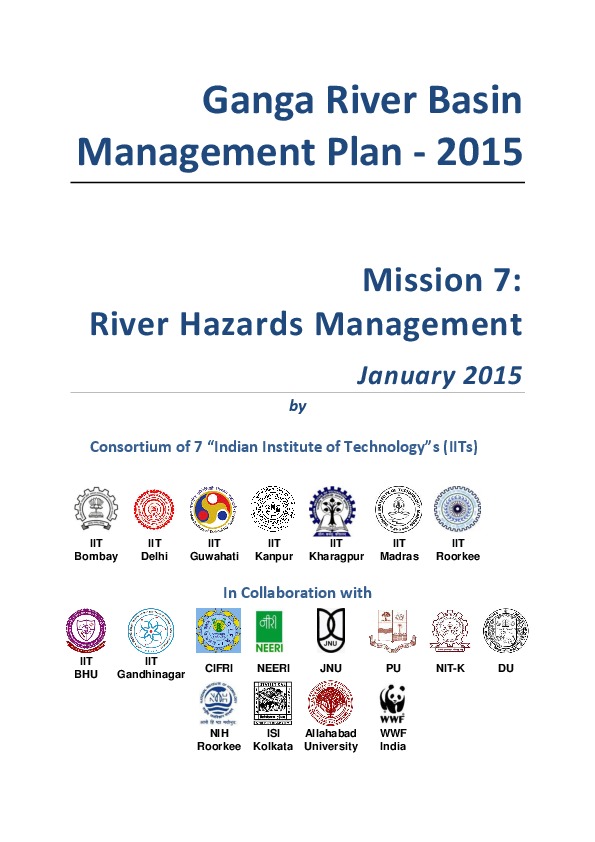 Rivers draining the Ganga basin are prone to two major river hazards – river dynamics and floods – and these are intricately interrelated. However, anthropogenic disturbance along the rivers such as landuse/ landcover changes, interventions such as barrages and dams, developmental projects such as rail/road networks, and even floodcontrol embankments have increased river hazards manifold. The objective of Mission "River Hazards" is to identify river hazards related to anthropogenic disturbances and to formulate suitable means to reduce the risk. River dynamics is a natural phenomenon primarily driven by channel instability caused by extrinsic factors such as tectonics or intrinsic factors such as excessive sedimentation and local slope variability. However, the frequency of migration events has been severely affected by anthropogenic disturbance along the rivers resulting in sudden and disastrous migrations affecting large populations. For instance, the large–scale avulsion of the Kosi in August 2008 during which the river shifted by ~120 km in its middle reaches occurred due to a breach in the embankment 12 km upstream of the barrage. Similarly, several smaller rivers in north Bihar have documented avulsion histories that has increased manifold since the construction of embankments. Flooding is the other disastrous river hazard in alluvial plains of the Ganga system, particularly in the eastern parts. Flood control strategies in most river basins in India are primarily embankment-based which have not only influenced the natural flow regimes of rivers and modified the flood intensity, frequency and pattern, but have also created a false sense of security amongst people living in the region. The construction of barrages and other interventions has aggravated the problem further. Many Himalayan Rivers are highly sediment-charged and a major problem has been the rising river bed and reduction in carrying capacity due to extensive sediment deposition in reaches upstream of the barrage. Besides, unplanned roads and bunds have resulted in severe drainage congestion and channel disconnectivity thereby increasing the inundation period significantly. Hence it is time to move from 'river control' to 'river management' that necessitates the appreciation of the role of geomorphology. Further, the impact of engineering structures on river systems must be assessed primarily focusing on natural equilibrium and assessment of degradation due to anthropogenic factors such as geomorphic assessment of rivers and impact on ecosystems. Some specific recommendations are: (1) Preparation of basin scale flood-risk maps based on scientific data and reasoning such GIS based, interactive maps based on historical data analysis as well as modeling approaches linked to an online data base and flood warning system. (2) Urgent drainage improvement and land reclamation in low-lying areas. (3) Assessment of soil salinity and mitigation strategy, including the use of salinity resistant crops as well as soil improvement practices. (4) Alternatives to embankments for flood management with an emphasis on 'living with the floods' concept such as floodplain zoning and other non-structural approaches. (5) Research on sediment dynamics and its application in river management projects for designing sustainable river hazard management strategies.