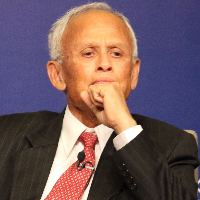 Prof Asit K. Biswas is universally acknowledged as one of the world’s leading authorities on water, environment and development-related issues. He has had a very distinguished career as an academic; a senior public official in Canada; advisor and/or confidant to Presidents, Prime Ministers and Ministers in 19 countries, six Heads of United Nations Agencies, two Secretary-Generals of OECD, several Heads of bilateral aid agencies, and four CEOs or Chairmen of major MNCs.

Among his numerous awards are Stockholm Water Prize, considered to be the Nobel Prize for water; Crystal Drop and Millennium Prizes of the International Water Resources Association; Walter Huber Prize of the American Society of Civil Engineering; “Person of the Year” award of Canada; and Aragon Environment Prize of Spain. He has received seven Honorary Doctorates from leading global universities.

He is the author of 88 books and over 500 papers, which have been translated into 41 languages. He is the founder of the International Journal of Water Resources Development and was its Editor-in-Chief for the first 29 years. He is a member of Russian Engineering Academy and European Academy of Sciences. In 2019, Prof Biswas established a new company, in Singapore, in 2019: WATER MANAGEMENT INTERNATIONAL PTE LTD, to advise governments, private sector and international organizations on policy issues on different aspects of water management. The Company also runs tailor-made Executive Education Programmes for countries and organizations.