Impact of Urbanization on the Hydrology of Ganga Basin (India) 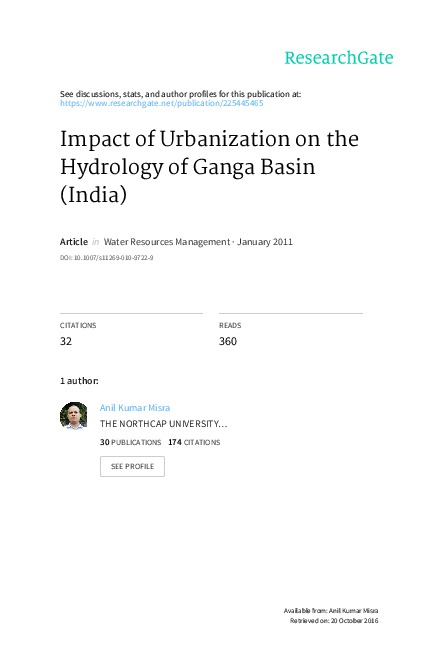 Large scale emigrations from rural areas to urban areas and population growth have been uninterrupted and accelerating phenomena in parts of Ganga basin, where urbanization is increasing at an unprecedented rate.

Urban agglomeration is causing radical changes in groundwater recharge and modifying the existing mechanisms. Majority of the cities are sited on unconfined or semi confined aquifers depend upon river water and groundwater for most of their water supply and disposal of most of their liquid effluents and solid residues to the rivers and ground. There has also been an inevitable rise in waste production.

Water tables are declining at approximately an average of 0.20m per year in many parts of the basin and there is a trend of deteriorating groundwater quality. The demand of water has been increased many folds and most of the areas are highly reliant upon the groundwater to meet this increasing demand for water, but unfortunately degradation of groundwater both in terms of quantity and quality has deteriorated the situation.

Studies shows that change in climate may increase temperature by 2 to 6°C and can reduce precipitation up to 16%, which could reduce the groundwater recharge by 50%. In densely populated Ganga basin urban drainage consumes a high proportion of the investments into urban infrastructure and needs integrated approach for the sustainable development of water management, water education regarding conservation and pollution caused by urbanization.